We’ve been hanging out in the St. Thomas area for a while, including Red Hook, Christmas Cove, and Charlotte Amalie (the big city- pronounced: Uh-mall-yuh) , and Crown Bay Marina.  First, we were doing boat-living chores and things getting ready for a week-long visit from my parents.  Then we came back for their departure and more boat-living-type stuff.  All-in-all, I’ve enjoyed the Charlotte Amalie harbor.  There’s lots to see and do.  I was surprised to find out that most everything around the harbor shuts down at 5:00pm, but that suits us just fine!  We did most of the chore-type stuff from the eastern side of the harbor, tying our dinghy to the dinghy dock that services Yacht Haven Grande Marina, right by the Cruise ships docked at the West Indian Company Dock or, sometimes, tied to the dinghy dock at Crown Bay Marina much further west .  Sometimes we could take care of business by foot.  Other times, we used the $1 “Safaris” or the $1 VI Tran buses.  We did most of the tourist/sightseeing things from the northern side of the harbor, tying our dinghy up to the public landing right by the U.S Coast Guard Station.  This is what I call the  historical district.  That may be what it’s really called

.  This is where the cruise ship passengers shop for jewelry and souvenirs, but it is very interesting to me because all the shops and restaurants are in beautiful  centuries old buildings.

Pretty scenes, of course, that crop up everywhere in the Caribbean

Sunday service at Nisky Moravian Church not far from Crown Bay Marina-This photo is a view from outside through a shuttered glass window(reflecting trees) looking into the building and through to the stain-glassed window on the other side. 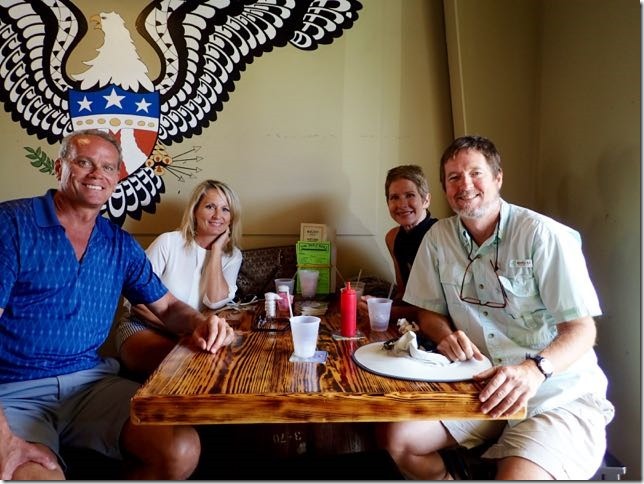 Lunch in Charlotte Amalie at Tap & Still with one of Mark’s high school classmates, Brian Ostrander, and his wife, Christie—They live here in on St. Thomas. 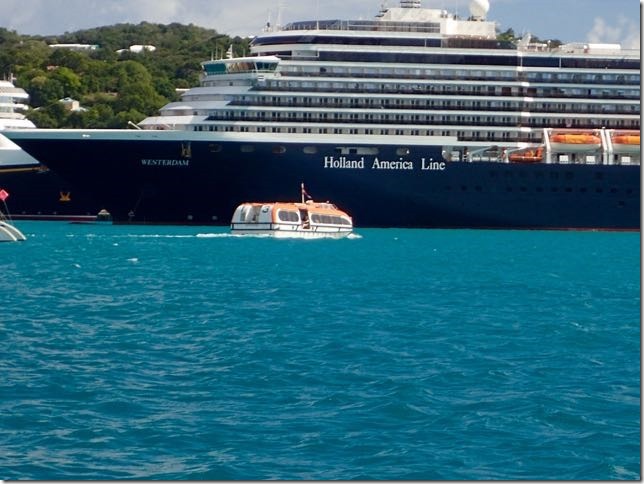 Watching the comings and goings of the cruise ships– this one is anchored since there are 3 others tied up to the West Indian Company Dock.  Shuttles carried people back and forth to the historic district all day.

A cruise ship employee took this picture of us as we were walking through the cruise ship dock area to get to lunch with the Ostranders.  He thought we were passengers, and we didn’t correct him

The dinghy dock we used to visit the east side of the harbor was right next to the cruise ships docked at the West Indiana Company Dock! 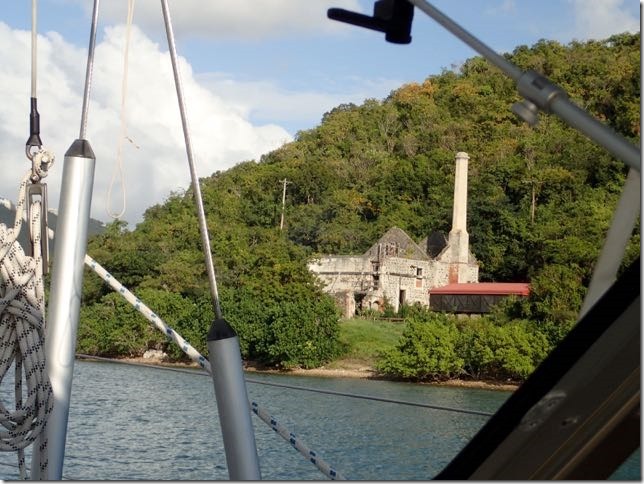 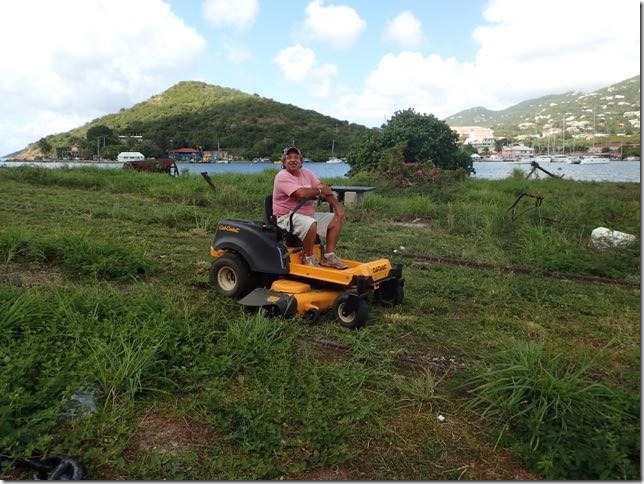 Fortunately, for us, we met Vince Palancia, Lead Hassel Island Guide, of The St. Thomas Historical Trust soon after we set foot on the island on our first day of touring.  He was happy to take time out from his mowing to answer any questions we had.  I imagine he was gratified to know someone was benefitting from his hard work on this historical site!  We made sure we thanked him!

Following, are a few more pictures from Hassel Island: 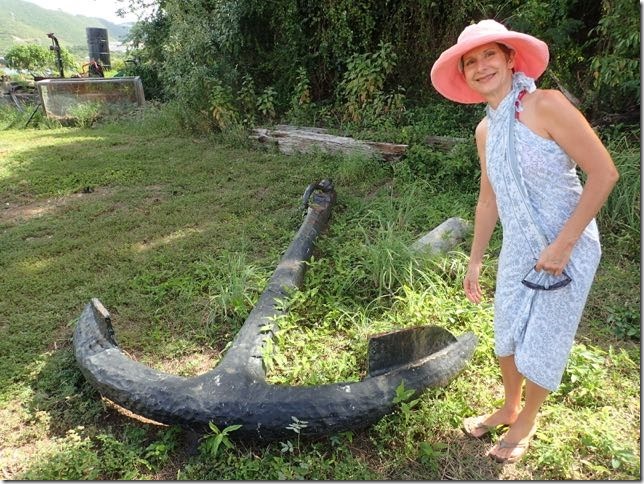 View back toward St. Thomas from Hassel Island 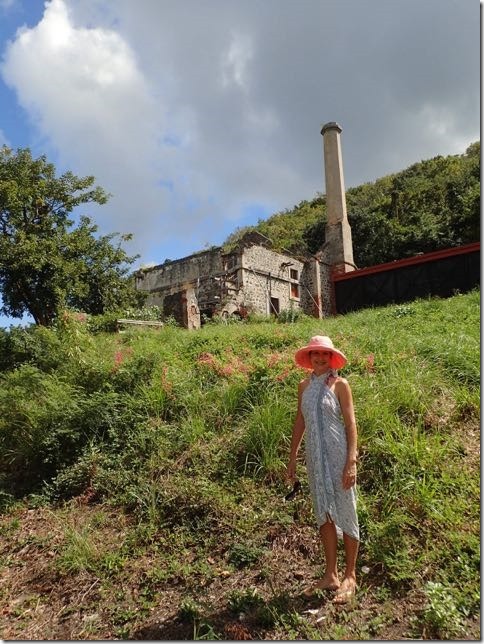 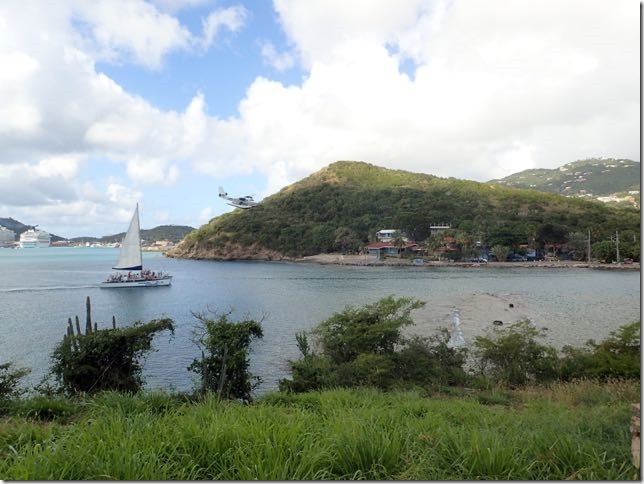 Looking towards Water Island, a seaplane buzzing past a tour catamaran loaded with passengers coming in for a landing 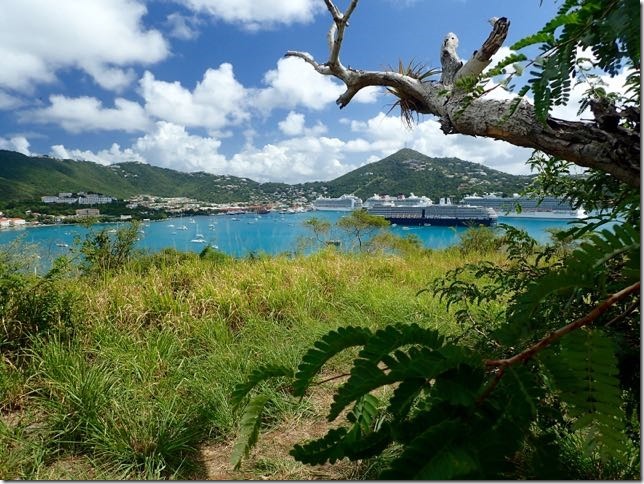 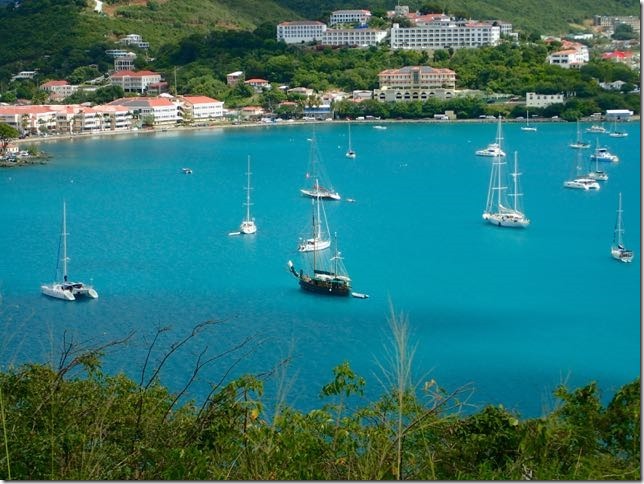 Nancy Lu is right behind the big, dark-colored, pirate-looking sailboat

I’m using every ounce of editorial skill that I can muster not to include 50 more pictures and explanations of the history that we learned.  If you’re interested, there’s enough info. here to start you on a Google search.  I really enjoyed our self guided tour of Hassel Island!

The most fun and interesting discovery on Hassel Island came from some boat-business we had to do, instead of sight seeing.  We had a local sail maker, Manfred Dettrich, cut down the size of our storm jib.  He lives and has his shop in a ruin of a great house that he has preserved just enough to be useful to him.  For example, he has used sail cloth to serve as a roof. The place is a FEAST for the eyes.

Having the storm sail cut down in size was, hopefully, the last step necessary in implementing Mark’s idea for our improved rig for sailing to windward.  We tried his idea out with the soft shackles that he made as we sailed to St. Thomas from Culebra.  That’s when he found out that our storm sail is just to large to work with this sail plan.

On the way from Culebra to St. Thomas

After testing it out after we got back to Nancy Lu from Manfred’s shop on Hassel Island, Mark thinks it’s going to be perfect!  An added bonus, in Mark’s opinion:  Manfred, removed the big florescent orange square that was on the storm sail.

ANYWAY,  it has taken even more self control than before to only post a fraction of the pictures of Manfred’s shop/ home and grounds!!

19th Century Cistern with artistic embellishments made by Manfred

There’s sooo much to look at! 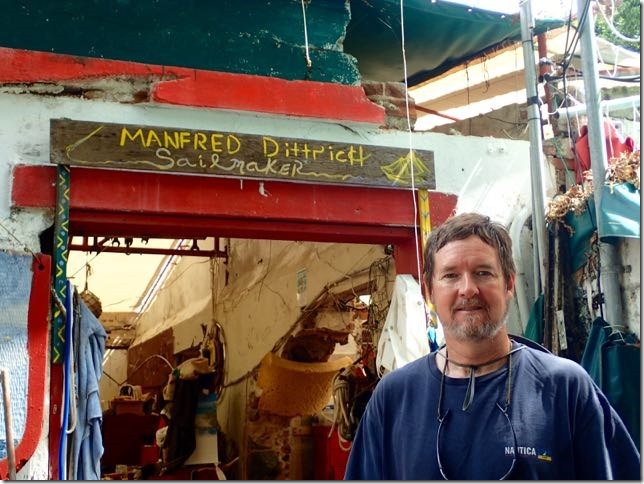 The sail maker at work in his ruin-turned-shop

You can see the roof fashioned of sailcloth.

Mr. Dittrich invited me to have a look in his living quarters.  His artistic touch is everywhere! 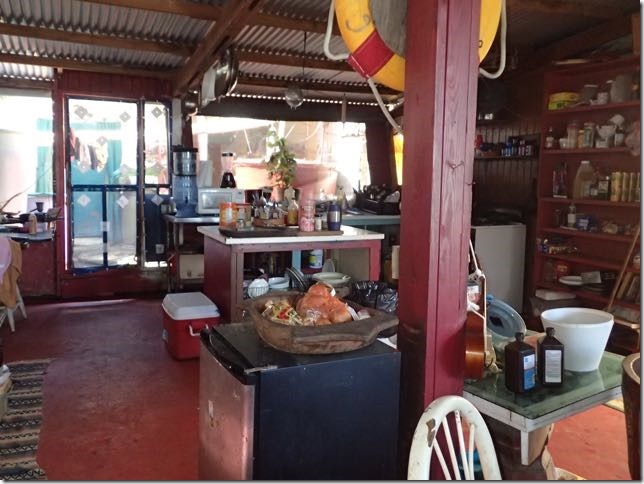 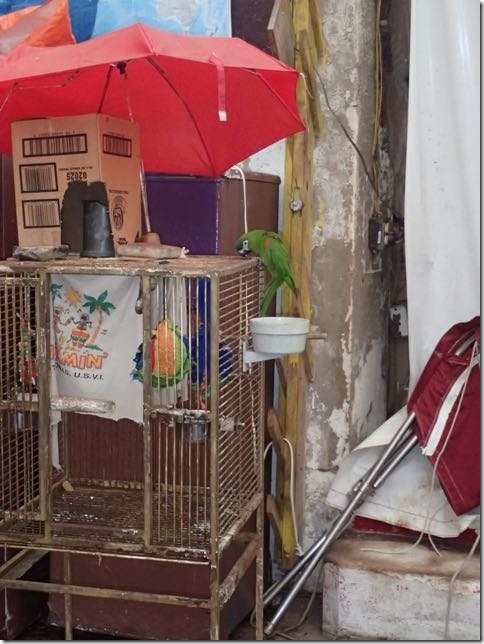 This is the view of the Charlotte Amalie harbor from Manfred’s “back yard”. 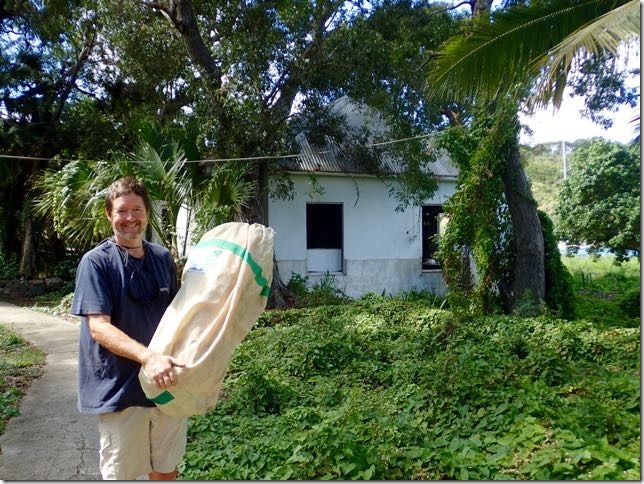 Happy, and ready to try it out! 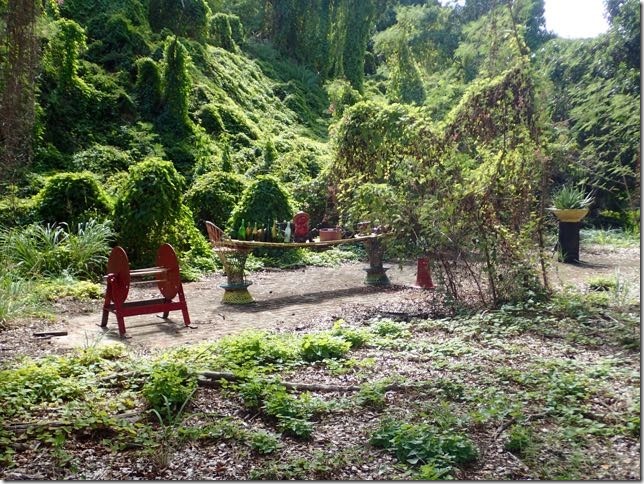 I don’t know what stone ruin those vines are covering.  The vine reminds me of Kudzu from the American-south.

Believe me, I had MANY more pictures!!  I couldn’t get enough of Manfred Dittrich, Sail maker’s, place!  It reminded me of my Papaw.

We sailed over to Christmas Cove for a couple of days so we had access by dinghy to Red Hook to do some provisioning before my parent’s got there and enjoy the lack of hustle and bustle that is Charlotte Amalie. 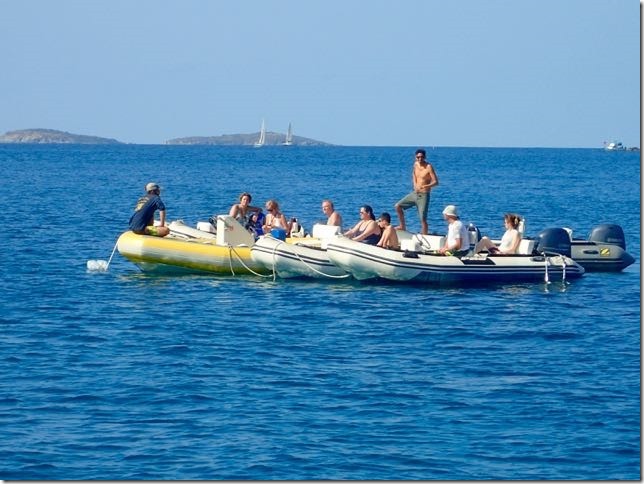 This is a dinghy-tour-group getting ready to go snorkeling…we had to save our snorkeling for another day…work to do!

After a couple of days, we sailed back over to the Charlotte Amalie area where we had made arrangements to pick up my parents…more about that in my next post!

After Mama and Daddy left, I was a bit melancholy which I expected, but we enjoyed a visit with one of the first cruisers that we met in The Bahamas in 2011, Bill and Laurie on S/V Manana, and the historic district of Charlotte Amalie for a few of days.

I really enjoyed Blackbeard’s Castle Historic Walking Tour.  I would recommend it at $12.50 per person, kids free!  It really has nothing to do with Blackbeard other than a fun, dramatic talk about him at the beginning of the self guided tour—there’s no Blackbeard’s Castle (I know, I don’t get it, either), but the tour DOES include: 1) a walk up the spiral steps of the 17th century Danish look-out tower, which protected the harbor as well as Fort Christian below 2) a dip (for as long as you like) in two swimming pools up by the tower (kids would love that) 3) a walk-through at your leisure of three historic 19th century colonial homes with docents at the ready to answer any questions and 4) a walk down the “99 steps”, just one of the “step streets” that offered access in the old days to different levels of the mountainside city.

We skipped the talk so we could get up the tower without the wait in line, savvy, huh! 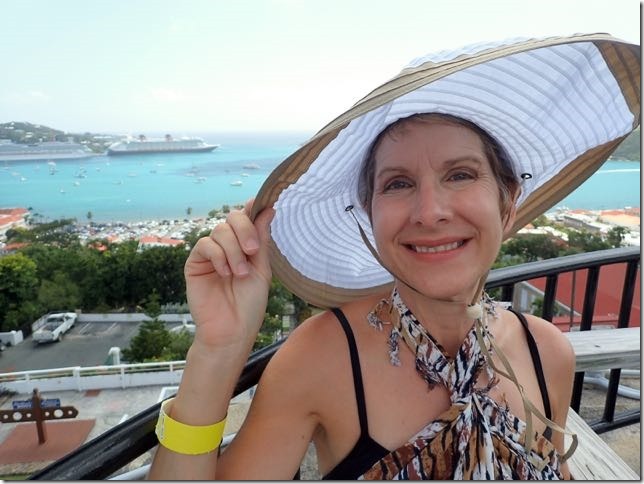 View to the west towards Crown Bay—more cruise ships 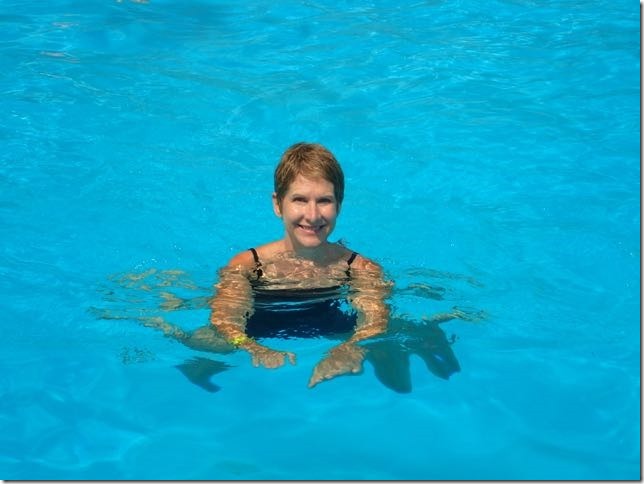 I wanted to get my money’s worth so I took a dip in the swimming pool.

The first historic home we visited

One of the most beautiful things about this house was the original mahogany floors. 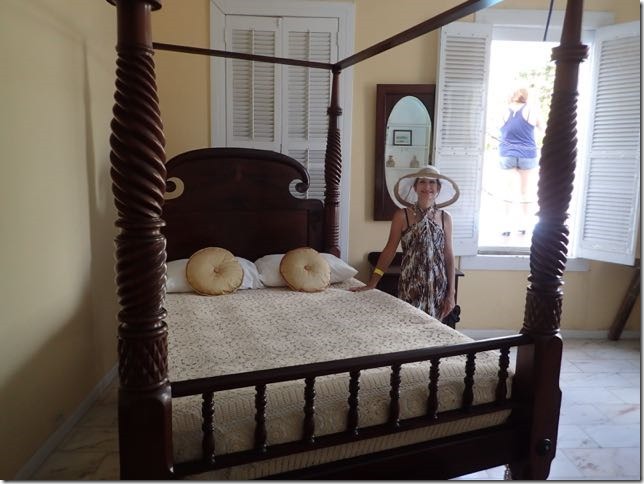 …Too much interesting history to write in my blog…. 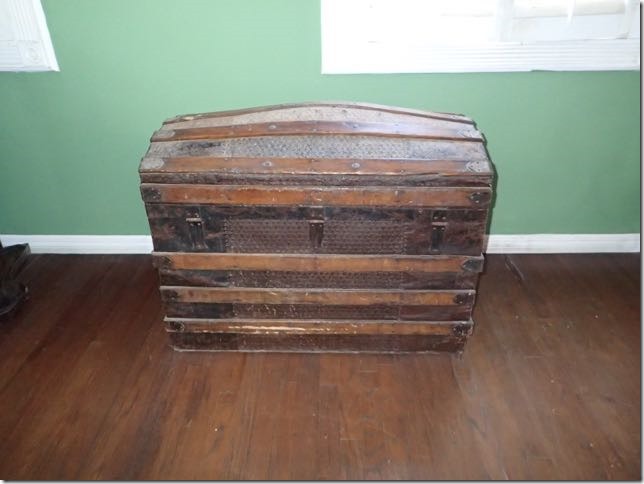 …Reminded me of Grandmama, Mammaw and the project I did while we were home during hurricane season.

The docent at Haagensen house told me that they let a homeless man live in this building that is part of an archeological dig next door to Haagensen House.  AND Mr. Haagensen built the West Indian Company Dock in the 1800s—the cruise ship dock of today!

Mark visited with one of the docents while I ran back up the steps to go look at an outdoor kitchen that I had missed! 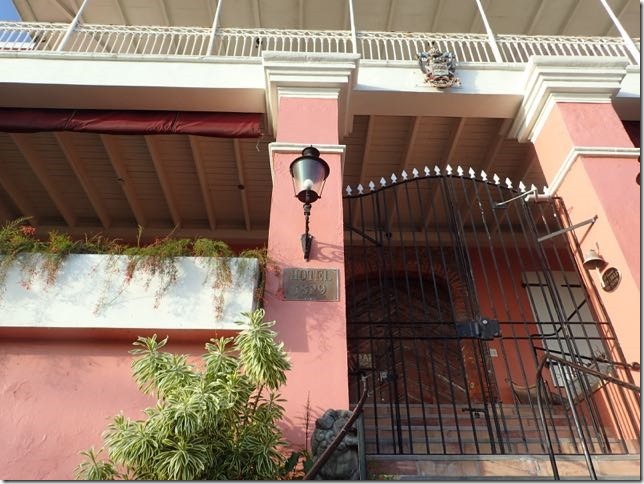 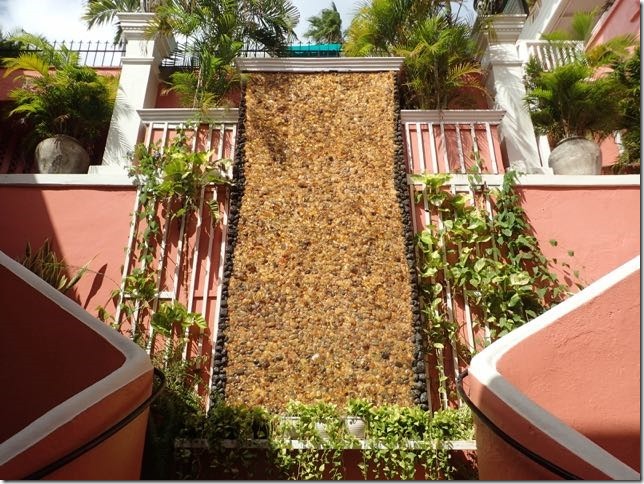 The stones behind this waterfall at the Hotel 1829 (named after the year it was built) are amber stones from all over the world. 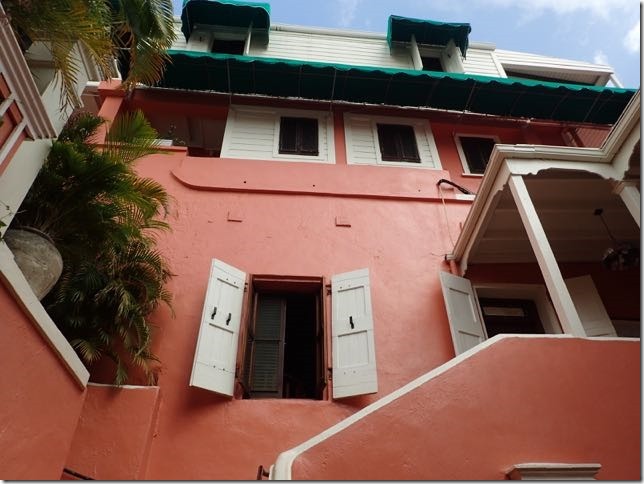 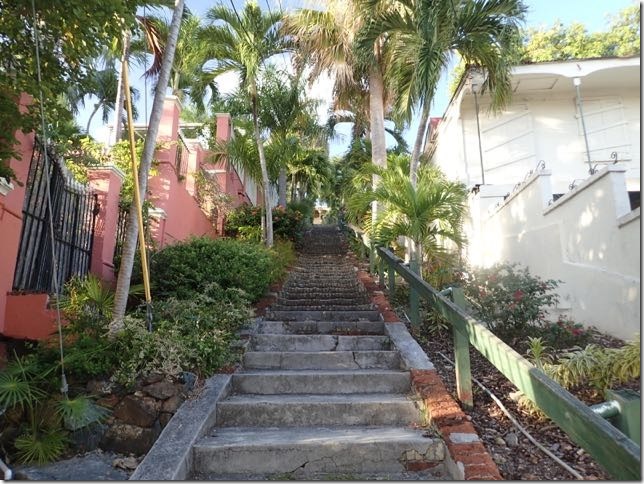 The “99 Steps” go by the Hotel 1829.  There are really 103 steps.  They are an example of “Step Streets” built from ballast in Danish ships way back when.

We ended our outing with a treat from Bumpa’s and some people watching.

Other sights we saw on other days:

We mailed a birthday card to our nephew and our first-born and a little goodie for our grandbaby from this historic building that houses the post office.

We’re moored in Caneel Bay at St. John, now, looking forward to spending the day with our friends Ronald and Sandra from S/V Sandra Louise.  They’ve gotten jobs and have been here since we left St. John last June.  We were planning on getting together yesterday, but it was blowing like stink, so we couldn’t make the dinghy trip around to Cruz Bay to meet them.  That’s how I got this post finished—a blustery day well spent!

2 thoughts on “ST. THOMAS TIMES—JANUARY 26 TO FEBRUARY 19…MORE OR LESS”