, I have a new pet peeve with signs at historical sites- they don’t tell you how to pronounce proper nouns—I want to be “in-the-know”!  ANYWAY, Puerto Rico has some smaller islands close by, which are known as the Spanish Virgins.  Culebra is one of these islands.  We visited Culebra last year and stayed just a little while.  This year we wanted to stay a little longer, so we did.

Both this year and last, we had cruiser friends with us in Culebra!

This year, from the very first evening that we anchored in the Harbor at Culebra and for a couple more days, we got to spend time with a couple that Mark had met in December at our marina in Puerto Rico, Chuck and Micki Harding on S/V Coram Deo.  What an impact they’ve had on our sailing-time this year in just those couple of days!  They are missionaries to the islands of the Eastern Caribbean where they pioneered Community Bible Study International (CBSI). They write in-depth bible studies and train local leaders of different study groups that they have helped cultivate on different islands (which means different countries) down through the islands as far as Grenada.  They’ve written a book about their ministry, ANCHORED, which Mark and I are reading.  We had fun having dinner with them a couple of times and getting a tour of Coram Deo, which is a 1984 Hallberg-Rassy 49.  Nancy Lu is also a Hallberg-Rassy.  As is common among sailors, Mark got an idea from Chuck’s rigging that he is hoping will help him accomplish a sail configuration that will help us sail to windward better.  He’s been working on this for a while now.  This is one of the ways meeting Coram Deo has had an impact on our sailing-time this year.

Chuck came on board to check out how Mark’s idea would work on Nancy Lu.

To put the idea into practice, Mark needs “soft shackles”.  So he learned how to make them. 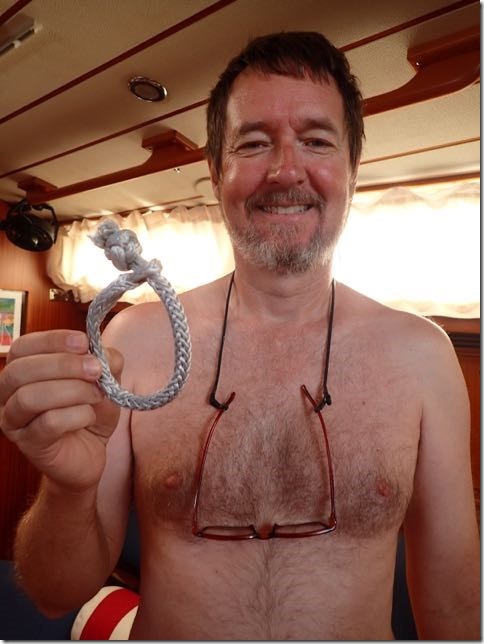 It doesn’t look like much, but each one takes about an hour for him to make following a YouTube video.  He’s made 3 so far.

Another (and more personal) way that Chuck and Micki impacted our sailing-time this year is that they set us up with an in-depth bible study group that meets every Monday night via Zoom (like Skype)!  The bible study is emailed to us, and we work on it 5 mornings a week answering questions to be discussed at the meeting.  So here we are on a boat in the Caribbean making new friends through this group in as far-away and diverse places as Michigan and Alabama!  What a great opportunity God has provided for us through Chuck and Micki!  We also look forward to visiting some of the bible study groups that they started on different islands that we will be visiting as we travel further south!

Last year, S/V Ally Cat was just one among many of our “buddy-boats” in Culebra.  One of the buddy-boat-type things we did last year with Ally Cat was to have Ally come over to Nancy Lu while her parents, Kimberly and Mike, went out to dinner to celebrate their anniversary .  This year, we were thrilled to reunite with them again in Culebra!  We’re not able to buddy-boat together this year since we’re going in opposite directions, but we had a wonderful week-long reunion with s/v Ally Cat at Culebra this year.  It was like old times

We had dinner on each other’s boats…I went over to Ally Cat for coffee and Kimberly’s homemade yogurt one morning.

We watched the NFL Playoffs together at Heather’s (a great restaurant that serves the BEST salad with fresh, not–fried grouper, if you ask.  We learned that from Coram Deo)– too bad that the Ally Cats are Patriot fans being from Massachusetts themselves. 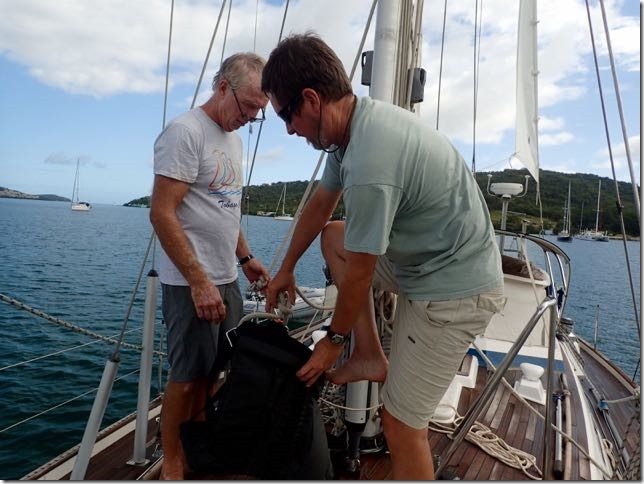 Mike came over and helped me hoist Mark up the mast so that he could fix our anchor light. 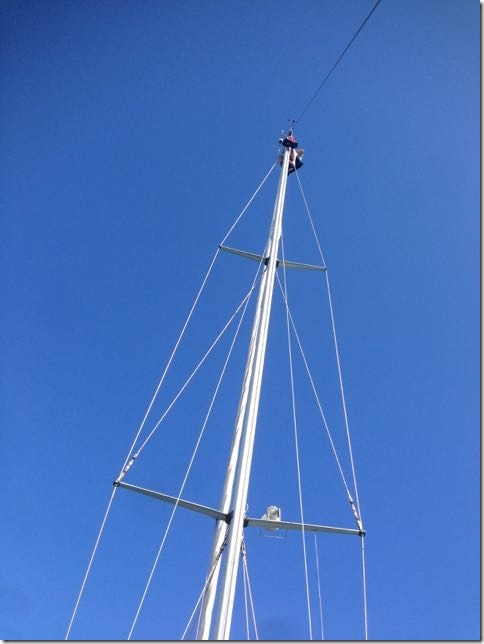 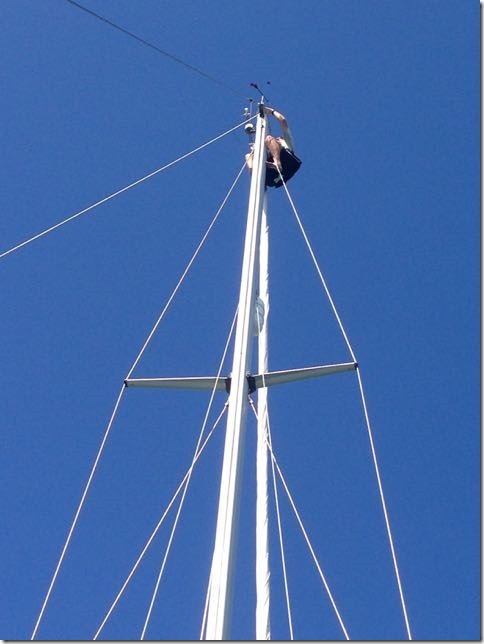 I got some pictures of Mark up the mast, and

He got some good shots while up there!

You can see our new solar panel in this picture and Ally Cat’s dinghy parked by ours. 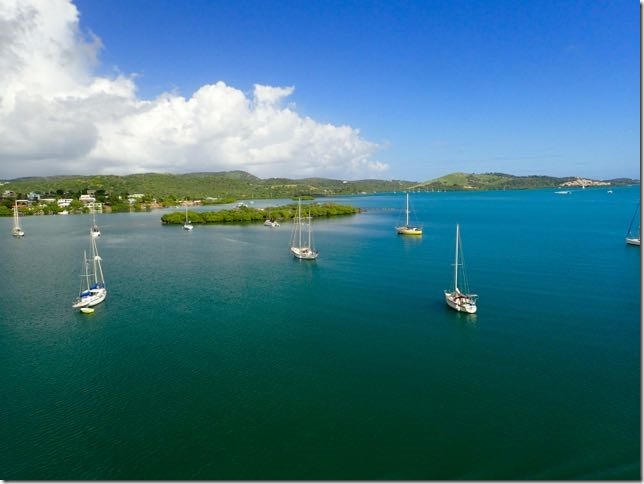 He also got some good ones of the harbor and island.  Most important, he succeeded in fixing our anchor light, YAY!  Thanks for your help, Mike!!!

We went on a dinghy trip with Ally Cat to Tamarindo Beach.

To get there, we dinghied through a channel to the other side of the little peninsula-like part of the island that is part of what forms the harbor where we were anchored in Culebra.

I love the statue of a man throwing a rock out into the sea that you see sitting on a jetty when you get through the channel!  He’s made of wood that looks like it’s been recycled from pallets—so intricate, interesting…and CUTE! He just evokes the joy of being and playing in these beautiful islands!

We anchored the dinghy out a ways and swam to the beach where we just walked, talked and beachcombed with Ally Cat.

One afternoon, Mark and I took one last walk through town before we moved Nancy Lu to join Ally Cat at a new anchorage further from town.  We were invited for dinner with them on their boat that night, so being closer to them made for a much more pleasant dinghy ride there and back, plus the wind had really kicked up, and this anchorage was more protected from the wind from that direction! 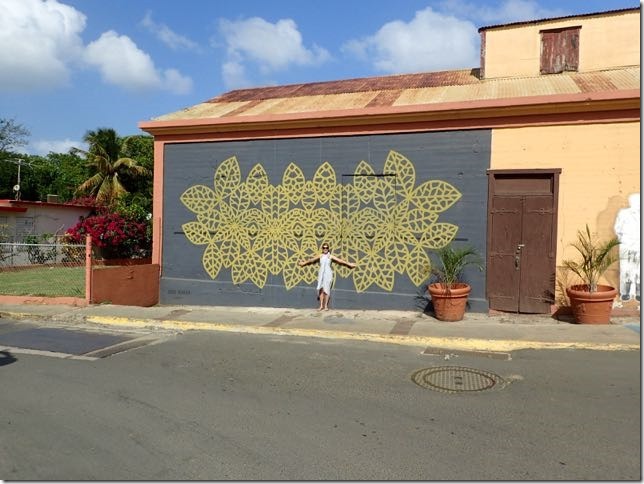 The town, Dewey, is full of art! 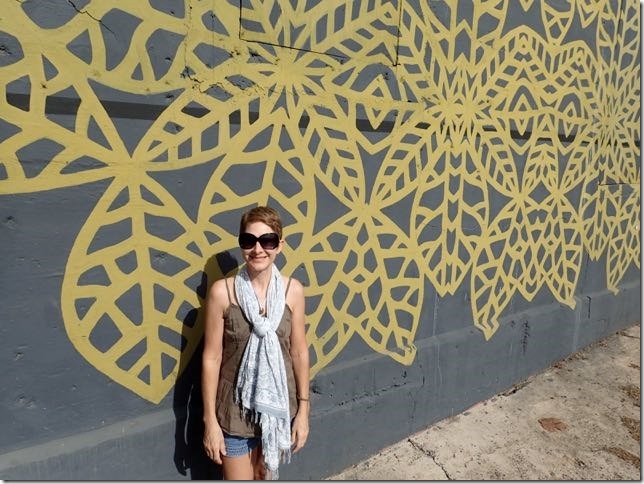 This is my favorite wall. 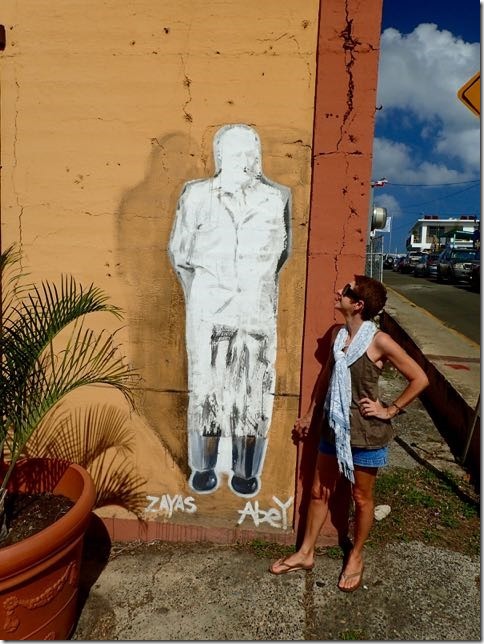 This man is at the other end of the wall and is made of paper (or something) and stuck to the wall. 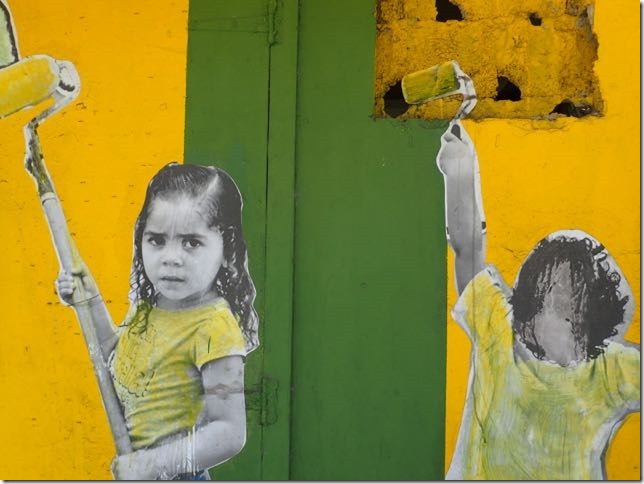 This wall is made the same way, but with photographs

Wow, this wall is practically decoupaged with old newspapers and a photograph—even the window shutters!

This picture was taken last year in Culebra, but I couldn’t leave this beautiful painted building out of this year’s collection 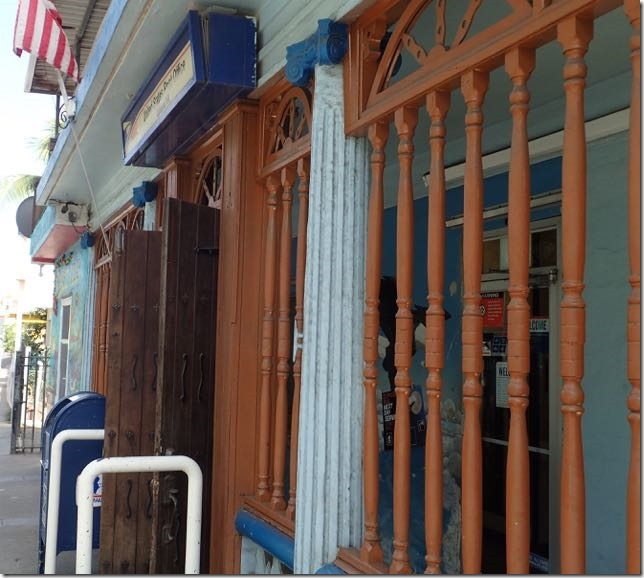 These beautiful old doors are another kind of art on this post office.

Looking out the window of a shop, we saw this mango tree with some of its beautiful, yummy fruit going wasted on the ground! 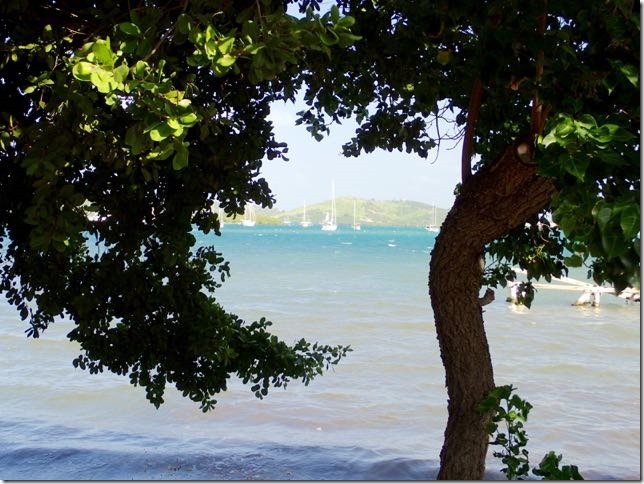 You can see Nancy Lu perfectly framed between these trees anchored out in the harbor.  She’s the only boat with a riding sail.

Dewey has a fancy looking new school.  We could see the roof from Nancy Lu, and it’s covered with solar panels.

One more painted building, and…

we ran into Ally and Mike at The Dinghy Dock, a popular restaurant where Mark and I enjoyed coming in the afternoons to have a coke and use their internet.

Even The Dinghy Dock restaurant is artistic,  Every light fixture is different and cool!

We enjoyed a yummy and relaxing dinner on Ally Cat that night, and in the morning, we packed a lunch and joined them for a 3 mile hike to Zoni Beach. 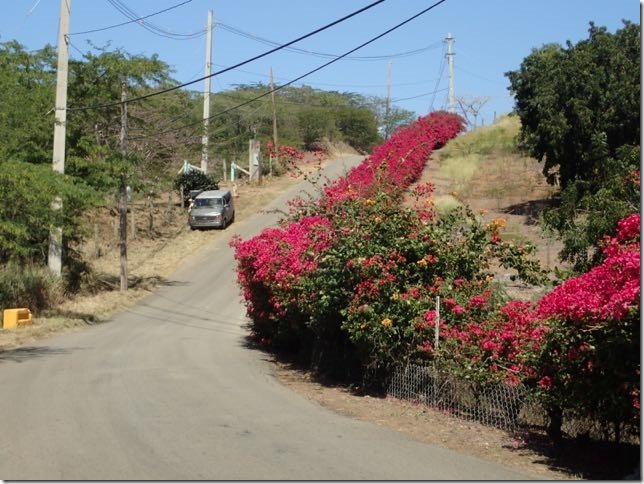 There were beautiful sights to see like this bougainvillea hedgerow!

It went on for so far!

The black and white cows at one of the large estates that we passed looked out of place to me for some reason, 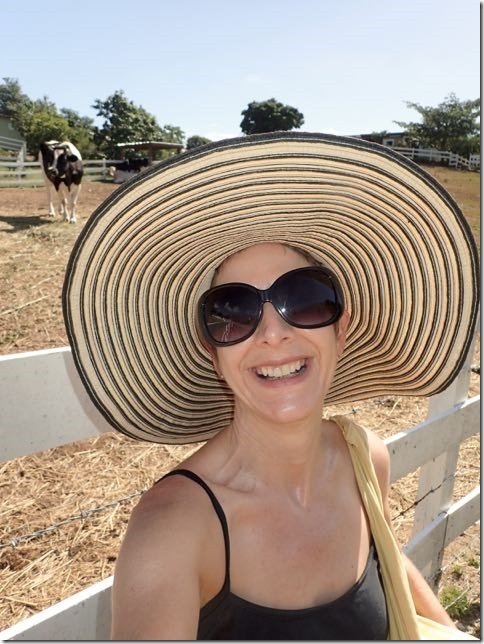 and made me laugh. 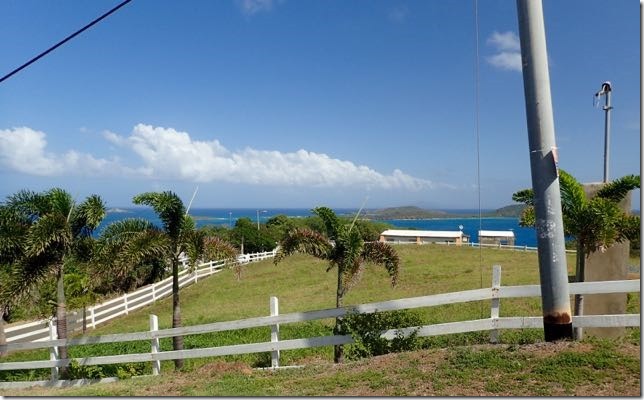 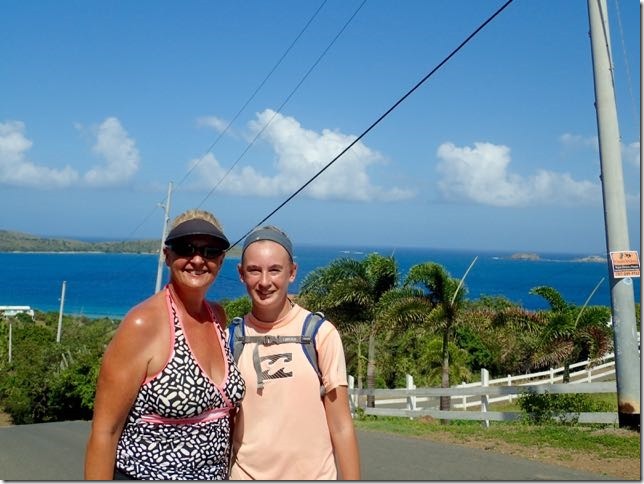 We thought we were almost there when we reached this lovely vista, but we were deceived.  What I enjoyed the most about our hike to Zoni Beach was talking and sharing with Kimberly as we walked; it made the long trek seem shorter.  Actually, Kimberly and I did a lot of talking and sharing over the week that we spent with each other in Culebra, which was a much needed treat for the both us! 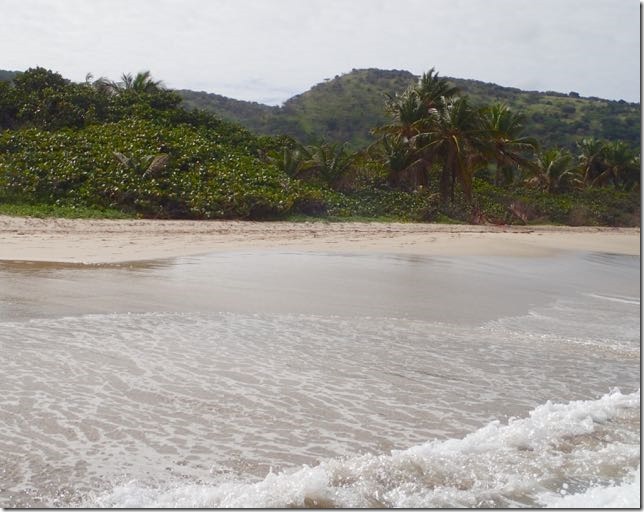 The long uphill hike was well worth our time on Zoni Beach!  Ally, Kimberly and I did yet more walking.  Ally had fun practicing her cartwheels in the sand.  I even did a cartwheel—cartwheels are contagious!  I had the urge to do more, but I thought I should be adult and not make a spectacle of myself.  I kind of regret my decision, now.  I’ll have to make up for it on another beach sometime. 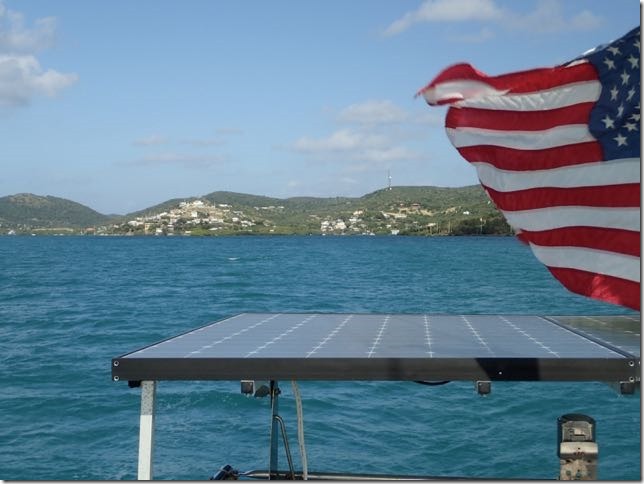 On January 28, we decided it was the right day for us to sail to St. Thomas so we shared our goodbyes with Ally Cat, planning to stay in touch and hoping that we’ll meet up on land sometime either in Texas or Massachusetts as Ally Cat’s 2 year sailing expedition is coming to an end later this year. 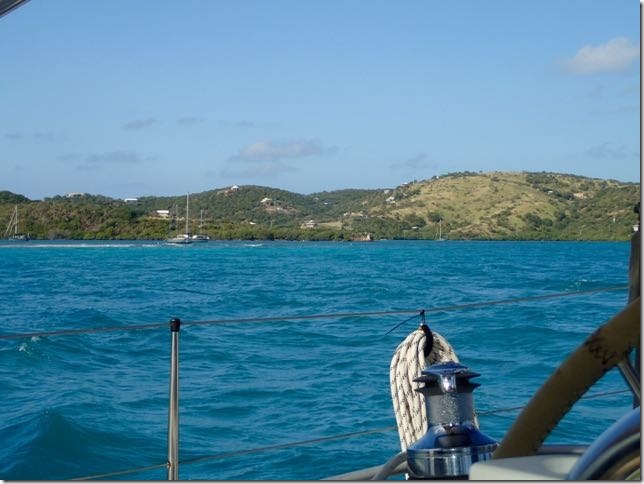 We also shared goodbyes and blessings with Coram Deo over the telephone as we passed the anchorage further out behind a reef where they had moved earlier in the week.  It would have been nice to have one more dinner with them, but we’ll surely keep in touch!

So all that was left was to say, “GOODBYE CULEBRA!!”