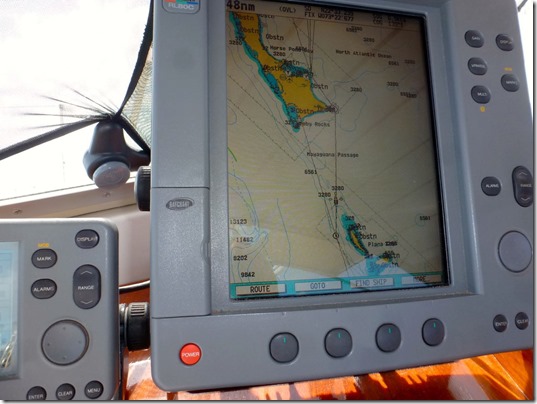 Our journey southeast has begun; so far so good!!! At the moment, we’re motor-sailing to the Turks and Caicos Islands. We aren’t alone in our journey south; that’s for sure! There are 21 other boats doing the same thing. Most of us left the George Town area on Sunday, March 15.

For the last two nights (Monday,16 and Tuesday,17), we were anchored in Abraham’s Bay at Mayaguana Island, Bahamas along with about 15 other boats arriving at different times.

There’s not much on Mayaguana Island; the tourism industry has missed this easternmost island of the Bahamas. All of the boats that were (and some still are) anchored there are part of what we’ve all decided on calling the “Chat-n-Chill Rat Pack”. We chose a name for ourselves so that any one of us can hail the whole group, using that name on the VHF radio, on which we are all standing by on channel 16 and 09. The “Chat-n-Chill Rat Pack” met a few times on Volleyball Beach close to the Chat-n-Chill restaurant bar and grill before we all left the George Town area and started heading south. One of the boats, Lequesteau, had the idea of meeting the first time; it was well attended and very helpful. After that, Mark sort of became the facilitator at the meetings, and that has carried on since. It’s a loosely connected group with each boat making their own decisions and buddying up with different other boats, but we all share information, help each other when needed, and end up at roughly the same places at roughly the same times give or take a few days.

Ronald, captain of s/v Sandra Louisa has chosen to stick to Nancy Lu like glue because, as he admits, he and his crew are very unprepared for this undertaking, and he’s decided (rightly, in my opinion) that Mark’s a great captain to rely on.  I think he’s made a wise decision.  We didn’t even meet Ronald and Sandra face to face until after we got to Mayaguana, but he’d listened to Mark’s ideas and seen his style of decision making at the meetings on the Chat-n-Chill beach.  Ronald says that’s when he knew Mark was the one he was going to follow.  Sandra Louise is another example of the “be kind” teaching that I talked about in my previous blog entry.  He’s decided to leave unprepared because he’s watched his brother die of cancer, his sister enter into stage 4 of the same type of cancer, and now he is battling cancer at 72 years old…he’s also a bit of a character!

An aside—WE HAVE NEWS: Our son, Ethan, is going to have a baby girl in September! We received this news when we were at anchor at Big Majors Spot, Bahamas. We’ve renamed that anchorage “Big Major News Spot”! It’s about time Captain Mark and I added grandparents to our titles list, and we’re happy to add Mother-in-law and Father-in-law to that list, as well! We lovingly extend a warm welcome to the new Stanley girls, Kristin and Baby-Girl-Stanley. Maybe someday we can bring our granddaughter to Big Majors Spot, show her the swimming pigs there, and tell her the story about how we first heard of her existence! I’m already dreaming of having her and her little family along on Nancy Lu adventures!

Our grandparents-to-be news solidified our plan for sailing to the Caribbean. When we started out in January, we were weighing 2 options: 1) going south this spring, sailing the Virgin Islands through the spring and into the summer, then leaving Nancy Lu in Puerto Rico at a marina for the rest of hurricane season, flying home for late summer through fall and the holiday season, then flying back to Puerto Rico in January to continue our Caribbean sailing; or 2) sailing Nancy Lu back to Brunswick in late spring, going home for a bit, sailing her up to Virginia some time in the fall, possibly joining a rally in October, sailing east to Bermuda and then south all the way to the Virgin Islands. It would have been roughly a 10day trip in all. Then we would have to fly back right away for the holiday season.

We chose the first option because it seems to work best with our baby coming in September. It’s the plan I preferred all along even though it requires us to add hurricane coverage for Nancy Lu and a longer stay on the hard at a marina in Puerto Rico this year.

Plan #1 also requires us to take what is known as “The Thorny Path”.  It’s called this because it requires you to sail east where easterly tradewinds prevail, that’s called sailing to windward.  It is impossible to sail straight into the wind so you must wait for the odd cold front or otherwise more favorable winds, unless you want to motor into the wind—like riding a bucking bronco, UNCOMFORTABLE or, if the winds are strong, IMPOSSIBLE! We’ve been doing a lot of reading in a book written by Bruce Van Sant called The Gentleman’s Guide To Passages South. It is an invaluable tool in going south—like the bible for that purpose.  In fact, Mark often reads passages from it before he goes to sleep at night. Van Sant tells his readers how to make the thorny path thornless. His goal is to have a “sundowner” every evening and take as long as it needs to take to get south comfortably with tiny little island hops. He teaches how to use the effects of nighttime winds coming off the islands to sail at night where you could not sail during the day and other rules to follow. We are using this invaluable information to help us on our journey south, but we aren’t following it to a T.

Bruce Van Sant would not have approved of our decision to make the first leg of our trip a 31hour passage, or that part of it would be a motor-sail, but we thought it would be good to get that leg out of the way. After all, we’ve done much longer passages than just an overnighter several times. I’ve since decided that we should keep overnighters to a minimum—why do it if you don’t have to?! The first 20 hours of our trip was a motor-sail very close to the wind—not comfortable. 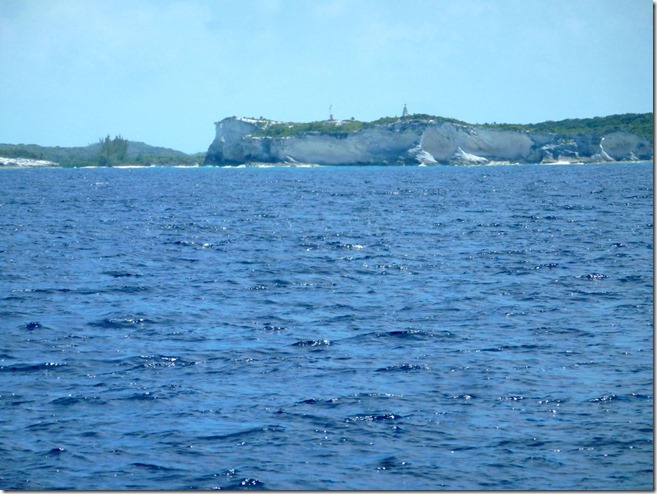 We were expecting the wind to shift around to a more comfortable angle for us around 2:00 in the afternoon, about the time we went around the northern tip of Long Island (a place we’ve visited in a rental car a couple of years ago with beautiful views and a monument to Christopher Columbus).  So we thought, hey, 5 hours of uncomfortable—no biggie. Well, the wind shift didn’t happen until 4:00 in the morning! WHAT A DIFFERENCE the wind shift made!! We were able to sail the whole rest of the way, and it was so nice! That Bruce Van Sant is on to something. We should probably learn from him! 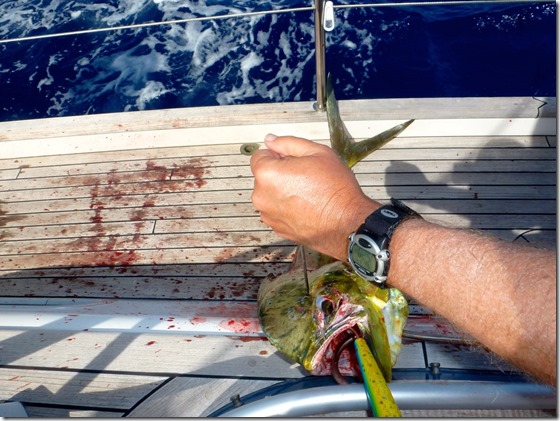 We caught a Mahi Mahi during the motor-sailing part of our journey the first day, which was an exciting diversion from the slog! That evening we had a nice fish-fillet dinner with eggplant and roasted asparagus—not bad for less than perfect conditions. For lunch, the next day, we had fish tacos—my favorite! By that time, conditions had improved and I was energized to cook again! The sail through the channel to our anchorage at Abraham’s Bay, Mayaguana was beautiful!

As seen from a distance, the differences in the water’s color were so vivid—almost neon! 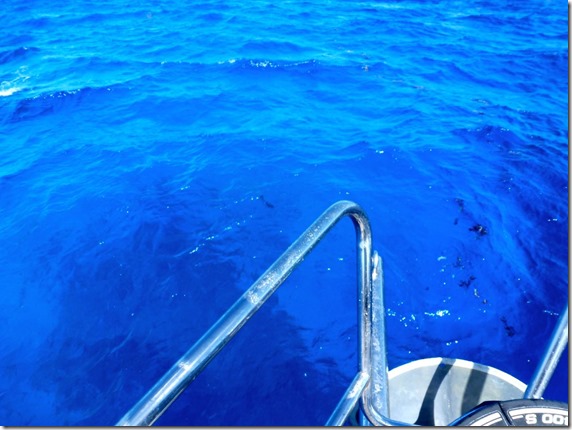 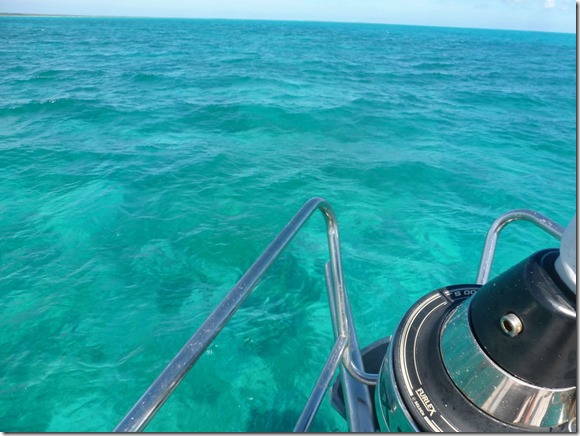 The color progression was very distinct as we sailed through them. It is so exciting to come to a place we’ve never been before!  When we got to Abraham’s Bay, I was ready to jump into that beautiful water for a swim; so I did!  Right off the bat, I was collecting sand dollars. I found a nice big Queen Conch for conch salad that I put in a mesh bag and hung off our stern into the water to wait until I radioed the boats in the harbor to see if they might be interested in having it. Nobody was up for dealing with the chore of cleaning the conch so it went free to trudge along the bottom of Abraham’s Bay for at least another day. The next day, we snorkeled the extensive reefs that we were anchored close to. The water was crystal clear and there was so much to see!! It was shallow, and I felt like I was in a snow globe swimming through a miniature forest of coral with occasional coral, Dr. Seuss-like, inns rising here and there for the colorful fish to take refuge, find a meal, and otherwise busy themselves.

This morning, Wednesday, March 18, we left at sunrise continuing on the next leg of our journey south to the Turks & Caicos Islands.  We experienced some trouble with our electric windless, the winch that brings up the anchor, so we had to hoist it up by hand—heavy!  We’ve gotten it back working now after trying some advice offered over the VHF by some of the Chat-n-Chill Rat Pack 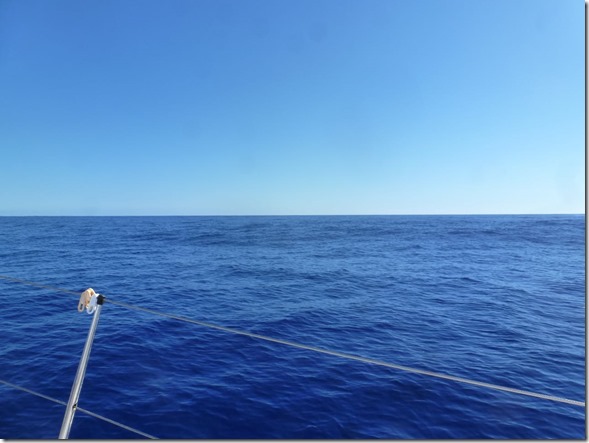 We started experiencing some swells while I was typing out this blog entry down in the main cabin (I tried to photograph them, but pictures just do not capture depth accurately), so I decided to close the computer and go up in the cockpit to avoid getting seasick…

…Picking up where I left off, later on Wednesday, after getting anchored at our destination of this leg of our journey:

As we got closer to our destination, Sapodilla Bay off of Providenciales (aka Provo) in the Turks and Caicos, the swells got bigger. It was a beautiful sight, like rolling hills—literally! 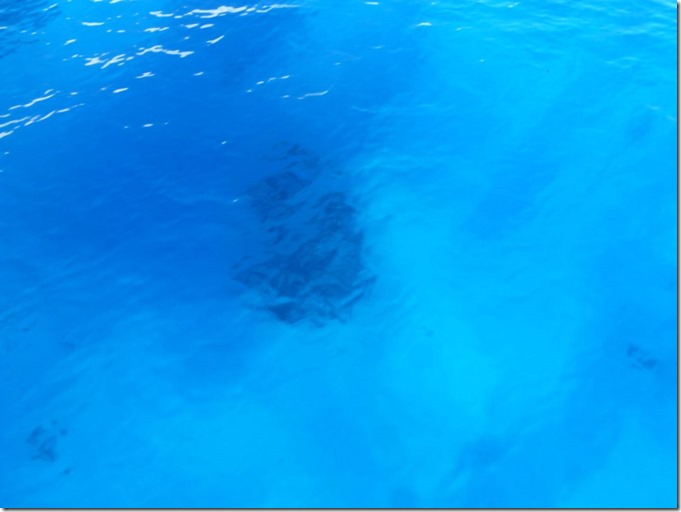 When the water got down to 50 feet—still pretty deep ocean—you could still see straight to the bottom—amazingly beautiful! 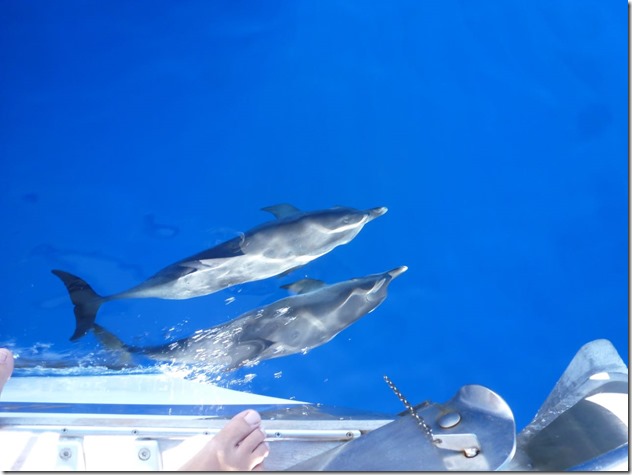 Closer to our destination, a couple of dolphins came to welcome us!! We had heard some of the boats ahead of us talking on the VHF about seeing a whale so I was on the bow keeping a lookout with Timmy. We didn’t see one, but our hopes are still high that we will when we leave this area from the east side at Big Sand Cay, our next destination, as this is the time of year when the Humpback Whales are migrating through.

As we got even closer, we saw rain showers in the distance.  They made it to us (or we made it to them) right as we were about to get to the harbor, but there were just a few drops of rain–Another beautiful sight!

when we were closer still, the rain was gone, but the sight was still beautiful!

I hear the dinghy arriving back to Nancy Lu! Captain Mark’s been up in town with a couple of other captains of our group checking in with Customs and Immigration. He reported that it was a “piece-of-cake”! We have all of our papers in order for Timmy, but we decided not to mention him and leave him on the boat throughout our stay here. Sorry, Timmy. All I really want to do on land here is go to the grocery store and visit, via dinghy, Southside Marina, which is supposed to be a gathering place for cruisers. In fact, some of our group has gone in there with their big boat. The Turks and Caicos have big mansions that we can see from our anchorage and high-end amenities. I think it is a playground for the rich and famous. I know that there is great diving along coral walls that drop off into the deep blue ocean. I would like to snorkel an area like that…we’ll see. Right now, it’s time to take down our yellow quarantine flag and put up the Turks and Caicos courtesy flag that another cruiser gave us before we left George Town!

4 thoughts on “OUR JOURNEY SOUTH HAS BEGUN!!!!”